Today, Emsisoft CTO/researcher Fabian Wosar released a new version of the Emsisoft Globe Ransomware Decrypter that can recover files locked by the latest version of this threat that made its presence felt for the first time during the summer of 2016.

Version 2, also referred to as Globe2, appeared two months later, in October, but both versions were no match for Emsisoft’s team, who released free decrypters for both variants shortly after Globe and Globe2 started hitting users.

Around New Year, the Emsisoft Lab team was alerted to the presence of a new Globe variant, Globe3, which was infecting users using a new mode of operation.

Just like the two previous Globe versions, Globe3 ransomware binaries were put together using a “builder,” a term that describes a software application which automates the process of customising a malware executable.

The Globe actors are using this builder to tweak various settings in Globe3’s behaviour, customising ransomware binaries depending on the targets they want to infect, altering ransom demands to larger sums in case they infect enterprises or using different Bitcoin addresses per different spam campaigns.

As you can see, the builder allows individuals with access to the builder to produce extremely varied Globe3 variants.

At the time of writing, based on information gathered by the Emsisoft team, users can recognise Globe3 infections by the two most commonly used extensions appended at the end of files, which are .decrypt2017 and .hnumkhotep.

Nevertheless, users that want to be sure they’ve been hit by a Globe3 variant can use the ID-Ransomware or Crypto Sheriff services, just to be sure.

The ransom note dropped by Globe3 is usually called “How To Recover Encrypted Files.hta” and an example can be found below. 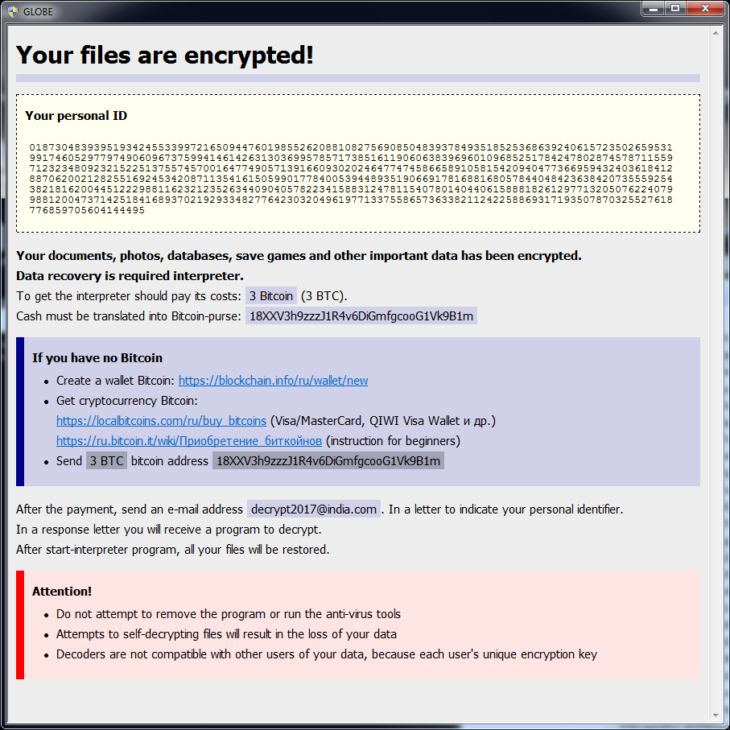 The biggest change to the previous two Globe versions is at the level of encryption operations. While the first Globe variant used the Blowfish encryption algorithm to lock files, and Globe2 used RC4 and RC4 + XOR, Globe3 relies on AES-256, a powerful symmetric encryption algorithm.

We won’t reveal how our Lab Team found a way to recover Globe3 encrypted files, but the decrypter released today supports all possible variants that can be produced by the Globe3 builder.

Nevertheless, due to a bug in the ransomware, decrypted files smaller than 64kb will be up to 15 bytes larger than the originals. This file size increase is due to the fact, that the ransomware rounds file sizes up to the next 16-byte boundary without saving the original file size.

For most file formats this is unlikely to cause problems. However, if applications show errors about corrupted file formats, users may have to manually remove trailing zero bytes at the end of the recovered file using a hex editor.

Users affected by Globe3 can download the free decrypter from here. The decrypters for Globe and Globe2 are also available, just in case anyone still has files encrypted by those versions, even if they’re not actively distributed anymore.

Antivirus software from the world’s leading ransomware experts. Get your free trial today. Try It Now

Emsisoft founder and managing director. In 1998 when I was 16, a so called 'friend' sent me a file via ICQ that unexpectedly opened my CD-ROM drive, which gave me a big scare. It marked the start of my journey to fight trojans and other malware. My story

What to read next

A comprehensive profile of the ALPHV (BlackCat) ransomware strain.

Ransomware statistics for 2021: Year in summary

Ransomware statistics for 2021. We explore the defining ransomware trends of the year, the most prolific ransomware variants and the countries that were most heavily impacted.

The State of Ransomware in the US: Report and Statistics 2021

The US public sector continued to be bombarded by financially-motivated ransomware attacks throughout 2022. This report looks at the numbers and the costs.

Malware never sleeps. Be sure to stay up-to-date on emerging threats.